Impact of Globalization on English Language 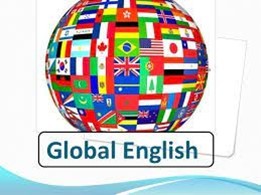 English language can be rightly regarded as the key to the store house of production and productivity. We can make use of this language to promote our world view and spiritual heritage and promote cultural and traditional aspects across the globe. The language has become a silver bowl to earn one’s bread and butter.

In this Global world English is the language of the latest business management. English language is not only a means for international commerce, it has become increasingly essential for inter-state commerce and communication.

The word Globalization is the buzzing word to all economists, a magical word to entrepreneurs and a material word to the governments and all other business people. Globalization is the trump card for the rapid development across the globe in terms of language, culture, tradition, customs, lifestyle, economy and science and technology.

Globalization originated with trade and marketing and crossed the national boundaries to connect people. Globalization has brought everything together but the English language made Globalization more possible and effective one.

Due to globalization, English language emerged as a global force. As statistics say English language is the most widely spoken tongue in the world today. It is English language, however, a bigger impact on the world as a whole and has become the global de-facto standard used in business, cultural, political and linguistic exchange.

“English rules” is an old phrase, “English language rules” is the new phrase emerged out of Globalization. Knowledge of English is very essential because countries are becoming globally integrated and coupled with each other in all aspects in terms of culture, economy, trade and commerce. This integration can happen only when language spoken is the same.

As per the international publication “Economist”, said India has multi languages out of these English is the only language understood all over India. Language remains potentially a communicating medium capable of expressing ideas and concepts as well as moods, feelings, thoughts and ideas. English language has revolutionized science and technology. It has become the main tool in computer languages and components. The purpose of the language and its influence leading to common objective. Computers are the most important technical tool that has revolutionised all walks of life and communication is no exception to the phenomenon.

The parliament has also recognized English as an official language in addition to Hindi. Realising the importance of English language then railway minister Laloo Prasad yadav demanded teaching of English language in schools. The greater demand for admission in English medium schools throughout the country is a testimony to the attraction of English to the people of India.

The main reasons for language Globalization are a] rule of British colonies b] exchange of socio-economic, political and technological advancements c] new trends in education system d] changing trends in market and world economy e] improved means of communication.

Here the very important way of promoting Globalization of language is through education, the policy of teaching a foreign language is a policy of globalization. It promotes the pulling down of linguistic barriers and encourages languages to travel freely across national frontiers. English language present enjoys a position second to none in the educational system of many countries including Arab world. Rampant use of English loan words in Japanese it is almost impossible to live in Japan without knowing English language.

A sea change has taken place in the selection process especially at corporate sector that is because of Globalization. Communication in English is the major requirement in the day-to-day selection process.

Today English is the language continues to make news daily in many parts of the world. If English language is not your mother tongue you may still have mixed feelings about it. You may be strongly motivated to learn the English language because you know it will put you in touch with more people than any other language. It gives you scope to work anywhere across the globe. More over it will give you economic, political and cultural status in the society.

English and Globalization are inseparable, living one on another in the present day world like body and soul of a human being.

Graddol, David (1998). The Future of English. London: The British Council.