It is a known fact that language is inseparable from its culture. While the accurate usage of sophisticated vocabulary and complex grammar structures and the acquisition of near-native pronunciation are often aimed by English language learners, few students think about the importance of cultural competence, necessary for a successful outcome of any intercultural encounter, be it a conversation with an English professor during a mobility program or an informal meeting with colleagues during an international job assignment. Moving to another country is usually coupled with culture shock experience and those, unaware of local unwritten norms, values, beliefs and behavioural patterns, are particularly vulnerable.

A Canadian anthropologist Oberg was the first to coin the term “culture shock” [3, p.178-179] in 1950s, which was later further elaborated by a number of linguists and intercultural communication scholars. According to a modern researcher Fitzpatrick [1, p. 291], culture shock is “… the increased levels of psychological stress and the process of sociocultural learning that results from the increased level of demands and lifestyle changes in a new and unfamiliar environment”. As any process, culture shock develops in stages. In general, four stages are identified:

In order to help newcomers to mitigate their distress and to progress in their adjustment to a host country, an academic and international business expert Marx [2, p. 11-19] offered a model which clearly defined what kind of internal changes an individual needed to undergo on their way through culture shock. They are as follows: 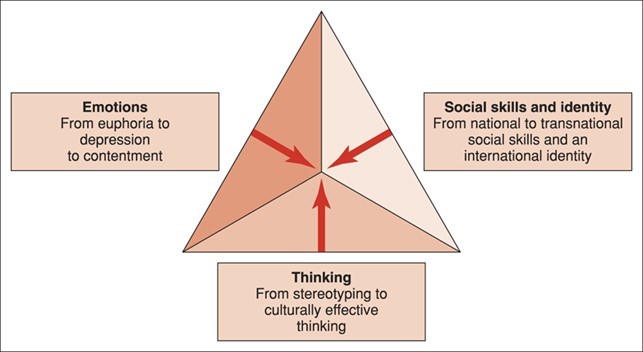 Considering the abovementioned and that people study foreign languages in order to be able to communicate and connect with individuals across the national, cultural and linguistic borders, introducing students to the dynamics, challenges and, the most important, ways to cope with culture shock during these potential encounters will prepare them to operate successfully outside of the classroom and in unfamiliar settings.

At the same time, open discussions about other aspects of intercultural communication during English classes are no less important. The workshops on cultural awareness and sensitivity, intercultural dialogue incorporated in the English language curriculum will equip future graduates with vital soft skills required in today’s workplace.